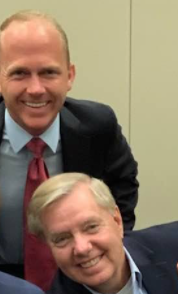 Mike’s Top 12 Reasons NOT to Vote for Timmons

1. NO ANSWERS – Encourage Timmons to speak at as many events, political functions, and radio interviews as possible - He never answers any questions, offers any solutions, or even sounds like he has any strategic political sense or foresight whatsoever. All he does is give us history lessons! It's awkward and embarrassing.

2. NO SHOW – Encourage Timmons to justify his extremely high ABSENTEE RATE in Congress - William Richardson Timmons IV just doesn't show up to work. Timmons has one of the highest absentee rates in all of Congress at 10.5%, missing 149 votes. He decided to get a Master's Degree while on the taxpayer's dime. He blames the military. After further investigation and talks with the Air National Guard recruiter, that simply is NOT TRUE.

3. NO TRUTH – Ask Timmons to explain what he meant on YOUTUBE when he said, "I am NOT for Lindsey Graham." - He then proceeded to write him a great big fat campaign check and aggressively campaigned for Graham in 2020.

4. NO CONSERVATISM – Ask Timmons to explain why he REFUSES to join the most conservative caucus in the U.S. House (House Freedom Caucus) - He gives some convoluted answers about NOT wanting to be obligated to vote with conservatives! Really? Please, keeping talking Mr. Timmons.

5. NO CLUE – Try to get Timmons to explain what he meant when he said on YOUTUBE that he votes with SQUAD member A.O.C. 5-10% of the time. Oops! Keep talking!

6. NO UNDERSTANDING – Ask Timmons what he meant on YOUTUBE when he says that when he votes on legislation, he votes the way a majority of his constituents want him to vote. Guess he does some kind of formal referendum each time he votes in Congress! Sounds like a pure democracy vs. representative government (REPUBLIC) to me.

8. NO BUSINESS SENSE – Encourage Timmons to explain why he voted to further in-debt our children and our grandchildren when he voted for 1/2 of the monstrous $1.5 Trillion Consolidated Appropriations Bill when Conservative Congressmen Jeff Duncan and Ralph Norman voted NO! Timmons didn't even have time to read the bill. We are now WELL OVER $30 Trillion in debt.

9. NO STRATEGIC POLITICAL INSIGHT – Ask Congressman Timmons what he meant when he said, and I quote, "I like the Infrastructure Bill because it creates jobs." - That would be the $1 Trillion Marxist-Socialist Green New Deal Infrastructure Bill that creates the WRONG kind of jobs and hurts small businesses in South Carolina.

10. NO CARE – Ask Mr. Timmons what he was thinking when he sponsored a bill to create a healthcare MONOPOLY in District 4 driving healthcare costs through the roof, abusing elderly finances. He is absolutely KILLING the elderly with these HIGH PRICES. Cutting deals with BIG HEALTHCARE is not good for the citizens of District 4!

11. NO CONSIDERATION – Ask Timmons why he chose a former PROFESSIONAL POKER PLAYER as his CHIEF OF STAFF as one of his first official acts as a Congressman? In the Bible-belt? Really, Mr. Timmons?

William Richard Timmons IV needs to be RECALLED with your vote on June 14th, 2022. He simply does NOT have the conservative experience necessary or the business sense to represent District 4.

p.s. With these results, I wouldn't agree to debate me either.

NO RESULTS
NO VOICE
NO ANSWERS
NO SHOW
NO THANKS

I LIKE MIKE - I will show up to work!